We’re now four days away from one of my favorite episodes of Dark Matter, episode 304: “All The Time In The World”.  Sure, you can look up the official short synopsis online, but I’d just go with my more succinct and descriptive “cuckoo-bananas” summary.  If you have friends or family members or casual acquaintances who’ve yet to check out the show, THIS is the episode to get them onboard.

There’s a fairly spoilerific official preview scene floating around out there you can track down.  OR you can check out these screen grab teasers instead… 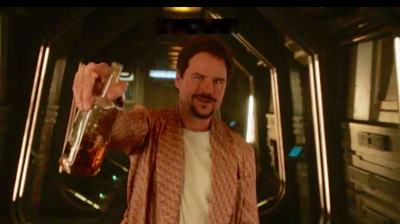 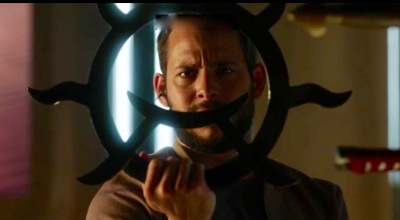 Slow but sure progress in the season 4 writers’ room.  We’re about halfway through breaking episode 403.  At this rate, we should have all 13 episodes broken by mid-July.

Unfortunately, the room itself will only run another week and a half.

Today, I leave you with a video of Suji demonstrated her displeasure with a…

I notice that whenever we go shopping, Akemi always entrusts me with the heaviest and least fragile items.  I find that both complimentary and slightly insulting.

Always, Day #2 of our weekend open house went off without a hitch – if you discount the fact that it rained for the entire two hours we took the dogs out. Apparently, another 12+ groups visited, and two couples were return visitors from yesterday.  One of them was even so keen, they floated a lowball offer that our agent respectfully informed them wasn’t gonna fly.

Hmmm.  Curious to see how this plays out.  As I’ve already said, I’m certainly not a motivated seller but, on the other hand, I can’t say I’m an unmotivated seller either.  I suppose it would be more apt to describe me as a disinterested seller. Will I sell the house?  Won’t I?  If I do, will I get…

We held our very first open house today which required us to be out and about for approximately two hours while prospective buyers meandered through our personal space and passed judgement on my complete Gilligan’s Island dvd collection. When all was said and done, we had thirteen groups come through with at least three of them showing actual interest.  But we’ll see how interested after the weekend when we open the floor to offers.

I, of course, hope we receive a terrific offer sooner than later for the simple reason that it will allow Akemi and I to sleep in our own bed again.  Yesterday, the stagers came in and fixed the place up, replacing pug art and my John Scalzi novels with nature paintings and Donna cookbooks.  They brought in some side tables, throw pillows, then spent a good thirty minutes steaming the wrinkles out of the new duvet…

Dark Matter returns tonight to its regular 9:00 p.m. time slot with a brand new episode: “Welcome To The Revolution”!

The crew tries to broker peace for a rebellion, but they won’t go out the way they came in.

The corporate war is still in full force on Friday night’s “Welcome to the Revolution” as the crew find themselves intercepting a battle between Ferrous and Trauggot in their search for their old semi-ally Tabor Calchek (David Hewlett). In the process, they discover they’ve landed in the middle of a tense fight for independence between colony workers and Traugott security.

Tomorrow night at 9:00 p.m., on Syfy and Space Channel, it’s an all-new episode of Dark Matter.

Welcome To The Revolution: After receiving a distress call from a former associate, the crew of the Raza find themselves in the middle of a colony’s fight for independence.

An Advance Preview of “Welcome To The Revolution” by SpoilerTV’s Aimee Hicks.

It is a big episode with big consequences and even bigger surprises. Not everyone will make it back to the Raza and this episode has a very high body count.

And here’s a sneak peek scene from tomorrow night’s episode:

Anthony Lemke told us Season 3 delves into Three’s journey, and that means one thing: more Sarah! Yup, Natalie Brown is back in “Welcome to the Revolution,” but not in a way…

And it’s a chunky little monkey packed full of actiony-twisty-turny-funny-charactery goodness!  Now all we have to do is break twelve more and we’ve got ourselves a fourth season!

Space is a vast, unpredictable and, on occasion, unfriendly place. I wouldn’t go so far as to say that he is the only main antagonist but Ryo’s journey, which is decidedly separate from the rest of the crew, is heavily featured. I think the fans are going to lose their minds in the best way as this particular storyline unfolds before them.

I talk about season 3 with SpoilerTV’s Aimee Hicks

If you look back to Episode Seven, the Wendy the Robot episode, the one where we introduced Sarah and killed her off in the same episode, she’s in a stasis chamber and the…

Yesterday, the Dark Matter writers’ room focused on season and character arcs.  Today, it was all about our two part opener as  we beat out not one, not two, not three, not four, not five, but SIX interlinked narrative threads.  Season four will be, in a word, “crazy”.  But let’s not get ahead of ourselves.  Tomorrow, once we get over those two little speed bumps, we’ll move on to actually breaking Episode 401 and 402.

Akemi was in the neighborhood and dropped by – with a box of Beard Papa’s mini creampuffs…half of which she ate.

How about some behind the scenes pictures from Episode 302 “It Doesn’t Have To Be Like This”?

No, wait.  That’s another show.

Hiatus?  What hiatus?!  Today, the Dark Matter writers’ room convened to start plotting the show’s (hopefully, if all goes according to plan) penultimate fourth season.  Joining me for the creative festivities were Carl Binder, Paul Mullie, Ivon Bartok, and Alison Hepburn.  Over the course of the late morning and mostly afternoon discussions, we covered season and character arcs, the stories, the opening two-parter, and some pretty awesome scifi “developments”.  The currently-airing third season is our biggest and boldest yet – and it’s going to be very hard to beat.  But we’ll try!

The show has premiered in Canada, the U.S., Australia, the U.K., Spain, and Portugal – and Latin America, France, the Middle East, Germany, and Brazil are soon to follow.  To celebrate, here are some of my favorite behind the scene pictures (and a video) from the first part of our two-part opener: Being Better Is So Much Harder…

Well, it’s decided!  Sort of.  I’ve packed away most of my belongings and squirreled them away in the crawlspace.  This week, the place gets a top to bottom interior cleaning, an exterior power wash, and then, on Friday, the stagers come in to prepare the place for showing.  The house goes on the market this week and we have our first open house this weekend (during which Akemi, Lulu, Suji and I will make ourselves scarce).

On the one hand, I’ll miss the backyard and the downstairs work-out room.  On the other hand, we only use 25% of our living space and it seems silly to be paying upkeep and property taxes on a summer home.  Also, it would really be nice to live somewhere within walking distance of shops.  On the other other hand, where am I going to put all my stuff?

Anyway, we’ll play it by ear…