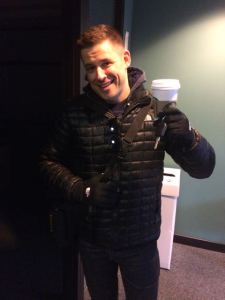 Between prep, production, and post, I hardly have time for anything else.  Hell, I hardly have time for prep, production, and post.  If I’m prepping an episode, I can’t be on set.  If I’m on set, I can’t be in editing.  And if I’m in editing, I can’t be in prep.  So what’s an Executive Producer to do?  Well, if you know someone with production experience (producing AND directing) and that someone shares your script sensibilities, then you hire them to set sit for you.  Which is exactly what we did.

Introducing new Dark Matter consulting producer Ivon Bartok who will be overseeing production of episodes #106 through #109. His duties will include script consultations, shot surveillance, and the putting out of fires both literal and figurative.  But especially literal. 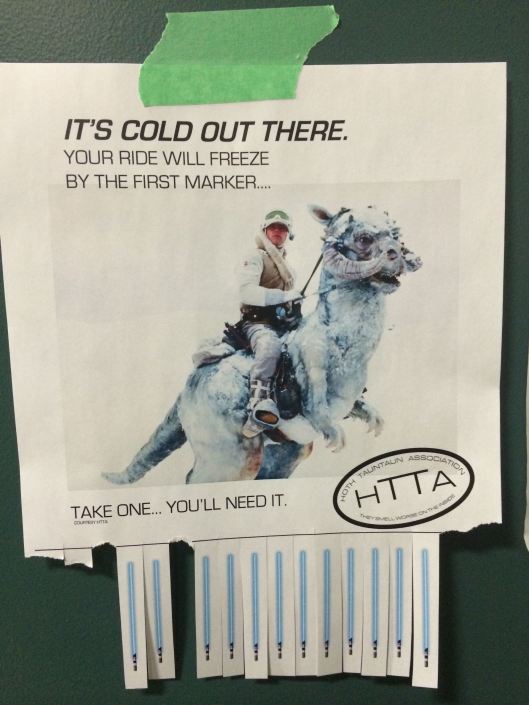 Toronto has been very Hoth-like of late, so I suppose I shouldn’t have been all that surprised to come across the above in the lunch room today.  Could’ve used that nice warm lightsaber while we were shooting in Hamilton last month!

Morning meetings today for episode #106 with director Ron Murphy (or “Murph” as he is affectionately referred to by members of the crew).  This one’s going to be an acting tour de force for Jodelle Ferland (FIVE) who’ll be spending the next couple of weekends in training with our stunt coordinator, John Stead, preparing for her very demanding fight sequences. 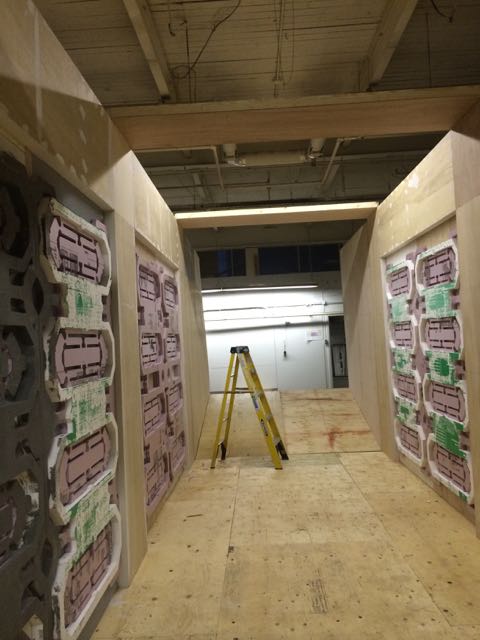 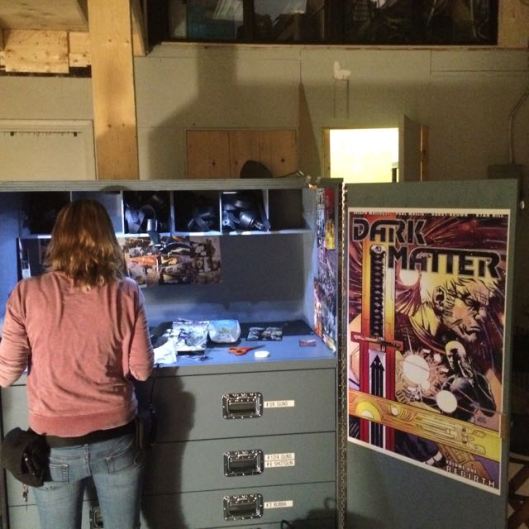 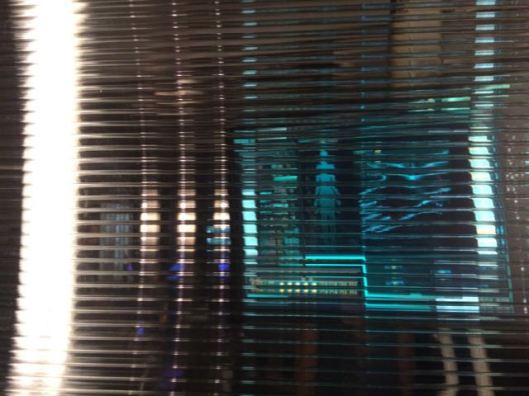 Hey, check out a recent interview I did with Joe Julians at Idiotbox.com:

“IB: We do have many further Stargate questions we would love to ask at some point but we really want to talk about Dark Matter. First up the… 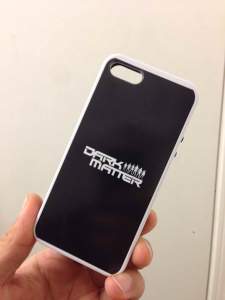 Hey, check it out.  It’s my new cell phone case compliments of actor Alex Mallari Jr. (Dark Matter‘s FOUR) who evidently grew tired of me going without.   I repaid the favor today by bringing him the vegan no bake peanut butter chocolate squares Akemi made for him. 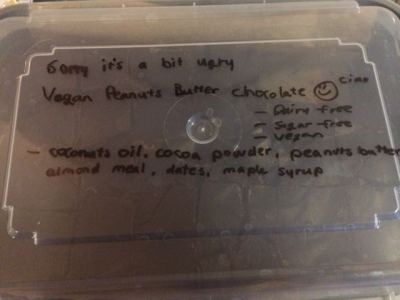 Continuing the visual roll-out of our Android, played by the lovely Zoie Palmer, here is another super exclusive spoilerific pic: 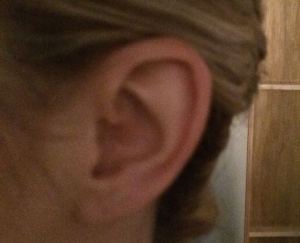 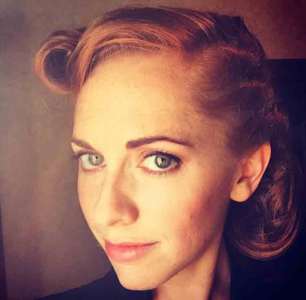 Tomorrow, we shoot in the corridors and airlock!

The Sock of the Day: 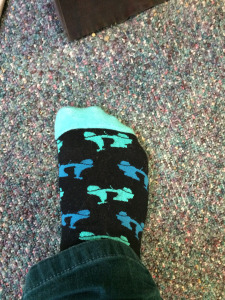 This has got to be my favorite post yet!

So there I was the other day, minding my own business, when I received the following message on twitter:

Hunh?  Who, I wondered, is zoiepalmer’s cat?  Well, I did a little research and, as it turns out, zoiepalmer’s cat IS Zoie Palmer’s cat, Cloverblob, who apparently has her own twitter account.  Hoping to avoid any potential conflict, I wrote back:

And I left it at that.  But upon further reflection, I thought it best to mention the incident to Zoie.  I approached her yesterday while she was waiting to shoot her first scene of the day and, unsure as to how best to break it to her, I just blurted out: “I don’t know how to tell you this but I think your cat is harassing me on twitter.”  I’m not sure what kind of a response I was expecting.  Shock.  Sadness.  Maybe an apology.  Instead, Zoie nodded knowingly, “Oh…

UNALIGNED welcomes Mahlers5th and Valksy, who join Sally in discussing the first half of Season 5 of Lost Girl. Gods, dads, families, Doccubus, Bo’s box – we talk about it all. Let’s dive in!

If the world were clear, art would not exist.
[Albert Camus, The Myth of Sisyphus]

Whoever fights monsters should see to it that in the process he does not become a monster. And if you gaze long enough into an abyss, the abyss will gaze back into you.
[Friedrich Nietzsche]

“Who am I?” “Where do I fit in?” “How does this world work?” “What really matters in life?” “Why am I here?” “Where am I going?” “Is that all there is?” These are the kind of questions that Bo has been wrestling with since the premiere episode of Lost Girl.  While viewers have been drawn to the show for varied reasons, Lost Girl

I love Dark Matter Costume Designer Noreen Landry and the rest of her crew in wardrobe.  They’re talented, resourceful, and incredibly creative.  Sometimes, I think, maybe a little too creative when it comes to some of the wilder ideas they’ve thrown my way.  Still, I thought I’d done a pretty good job of managing the more inspired pitches, deferring them to the nebulous foreseeable future.  That is until I walked into the costume department the other day and spotted this tacked onto the bulletin board: 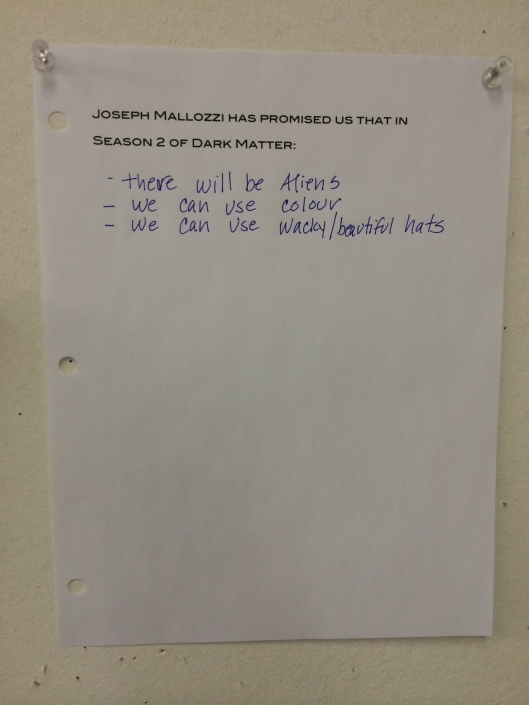 Well there you have it.  Season 2 spoiler alert!  Aliens, color, and wacky/beautiful hats!

Speaking of spoiler alerts and promises – yes, that press release concerning that familiar special guest star was supposed to come out this week…but now looks like it’ll come out Monday instead.  But while you’re waiting, here’s another casting hint.  His character has the distinction of being one…

The first time I met Jay Firestone was about two years ago, while I was in town working on some nameless production.  My agent called to inform me that he had scheduled me a meeting with a very busy, very successful local producer.  I thought: “Sure, why not?”.  Ninety-nine percent of the time, these meet and greets amount to nothing, but my afternoon was wide open.  This, as it turned out, was in contrast to Jay’s afternoon which was peppered with meetings, phone calls, and pre, post, and production duties.  An average day for him.  I had been squeezed into his frenzied schedule, somewhere between a network conference call and a meeting with another producer and yet, despite the tight window, our sit-down was laid back, unrushed, and surprisingly entertaining.  I say surprisingly because, as anyone who has ever done these kind of meetings will tell you, they’re about as… 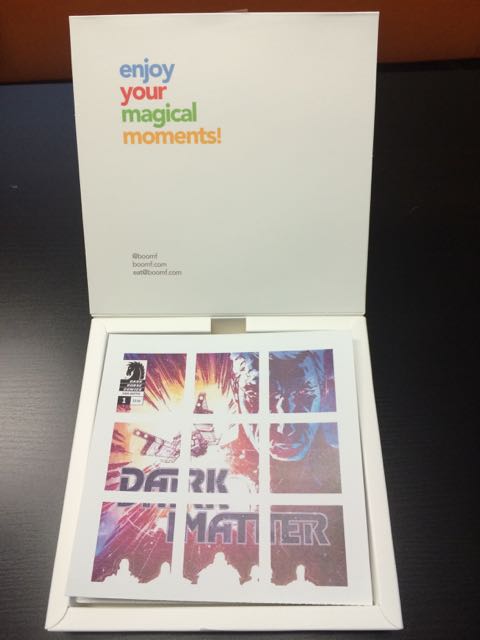 Well, how cool is this?  I returned from my two days of location shooting in Hamilton to discover this sitting in my office.  While in London, Jay picked me up this box of customized Dark Matter marshmallows: 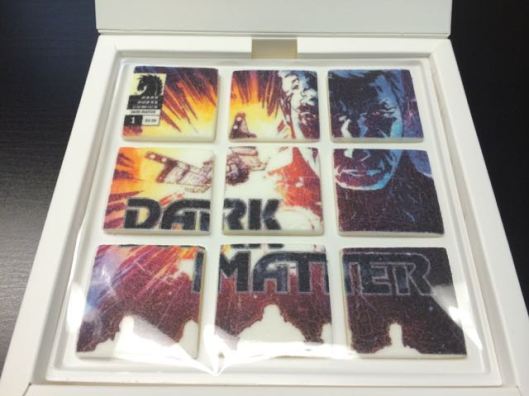 Pretty cool, no?  They’re so awesome, I can’t bring myself to eat them.

Of course I’m sure Akemi won’t have similar qualms.

In addition to the Dark Mallows, I found the following awaiting me as well: 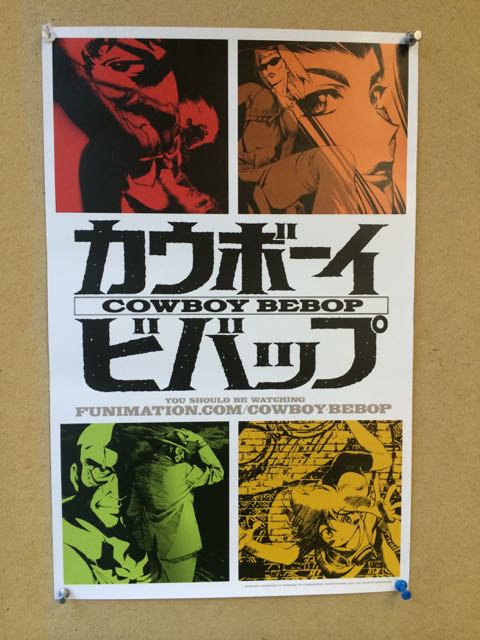 This poster comes care of Elana Nova Zatzman, President and Creative Director of EZ Designs, who was attending Otakon in Vegas when she spotted it and thought of me.  As many of you know, if I was to name one series that most influenced the creation and development of Dark Matter, it would be Cowboy Bebop.  It’s ultra-cool SF fun and if you haven’t seen it, you should definitely check it out.  You…

– Akemi today after lunch, her way of letting me know she ate too much. 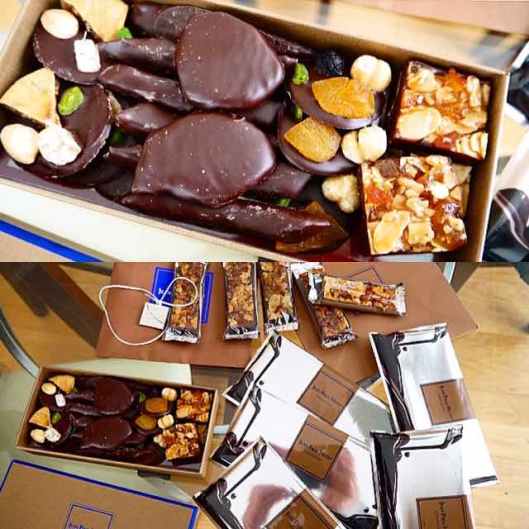 Pictured above: the chocolates I got Akemi for Valentine’s Day.  Jean-Paul Hevin, shipped from Paris.  They arrived three days ago and sat in the fridge because Akemi wanted to wait.  A dried fruit and nut chocolate medley for her – and I surprised myself with a bunch of dark chocolate bars.  I am SO thoughtful!

Today, Jodelle finally took us up on our offer and joined us for a morning and afternoon of food-oriented fun!  First stop, the farmer’s market for an organic fix. 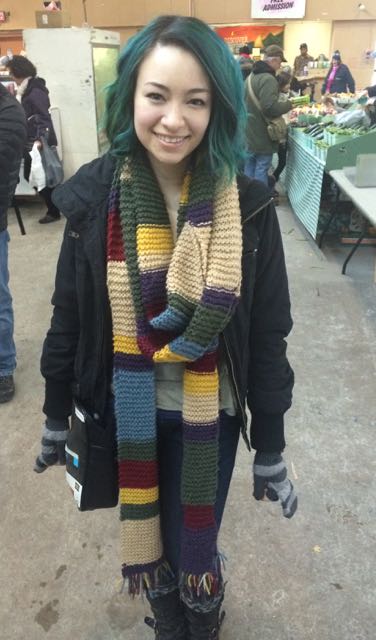 Well, well, well.  Look who knitted herself a Whovian scarf. 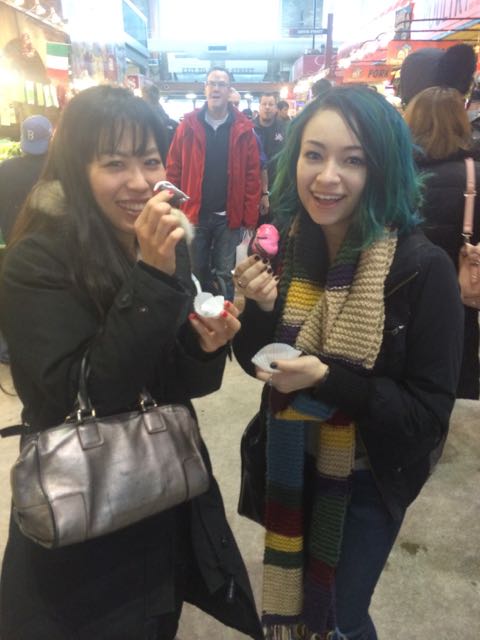 Chocolate-covered strawberries all around at the St. Lawrence Market.  Dark chocolate for Akemi.  White chocolate and strawberry for Jodelle.  But nothing for the clearly disappointed guy in the middle.  He missed out. 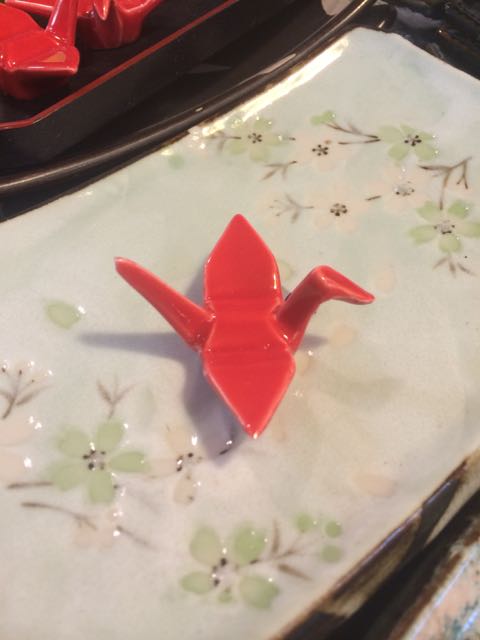 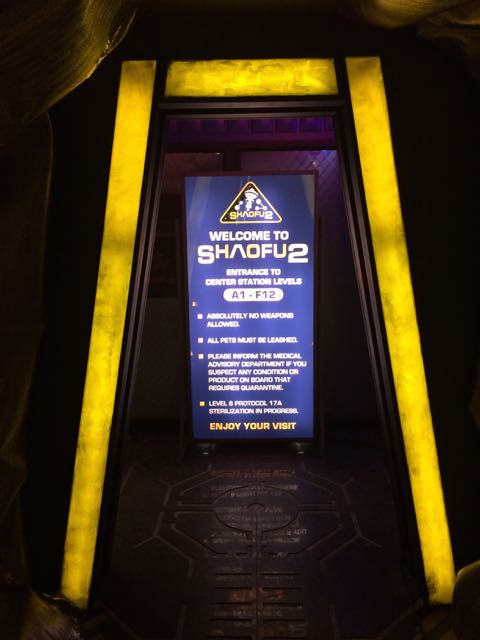 It was nice to get back on the ship today after two days in  on two distant space stations.  Our travels to Cygni-4 and Shaofu 2 may be over, but we’ll always cherish the memories… 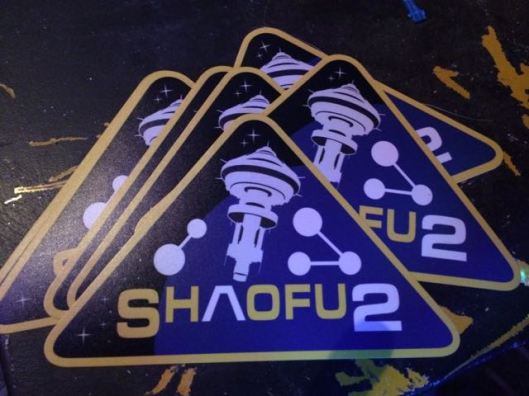 And these commemorative Shaofu 2 decals we picked up for our ships and shuttles. 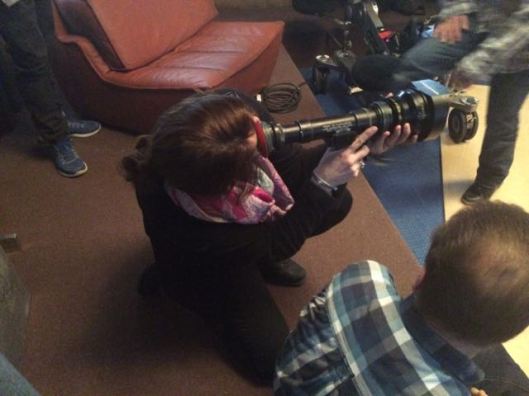 Shooting in the mess, quarters, and corridors today.  Here, director Amanda Tapping considers her next shot – and lunch options.  Look at her zeroing in on that tuna melt! 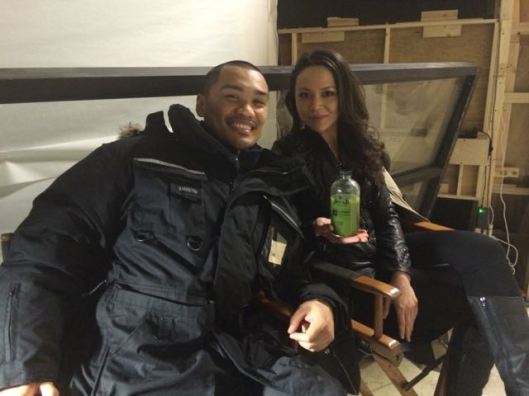 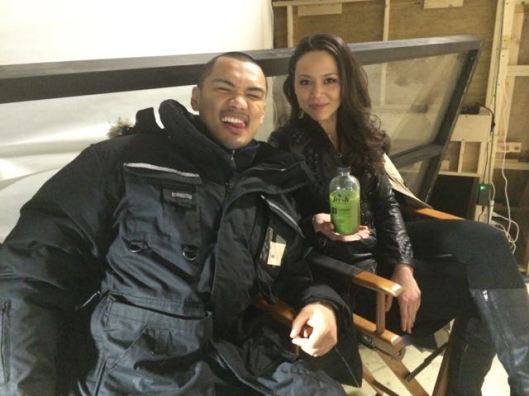 Downtime and green juice.  Alex’s face says it all. 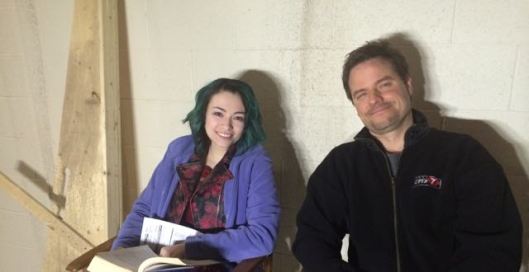 Jodelle Ferland (FIVE) tries to get some reading in (appropriately enough, Douglas Adams’ The Hitchhker’s Guide to the Galaxy) while Anthony Lemke (THREE) distracts.

Meanwhile, prep continued for episode #105.  Damn, a month ago, I was feeling relaxed with nine scripts under our…